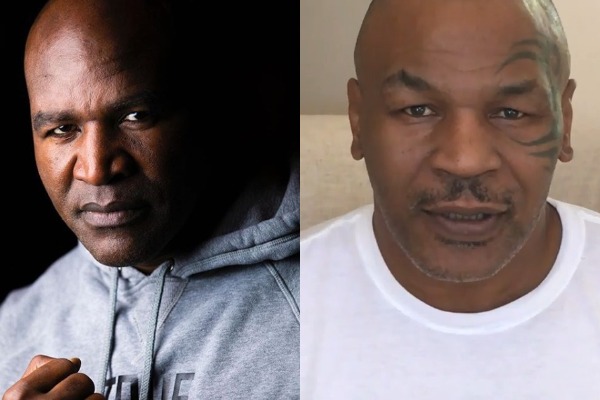 It’s official. Evander Holyfield is making a boxing comeback at 57 years old. He announced it in pretty dramatic fashion during a video posted to Instagram on Wednesday, May 6.

He’s not going to fight professionally but in exhibition bouts to raise money for an organization called #Unite4OurFight that helps young people develop socially, emotionally and educationally.

_Evander Holyfield (left) said he’s returning to boxing shortly after Mike Tyson (right) announced has own comeback. Many now want them to fight each other. (Photos: @evanderholyfield/Instagram, @miketyson/Instagram)_The black-and-white video shows Holyfield training rigorously. He jogs while throwing air punches, does some crunches and hits the heavy bag. “I’m back,” he says to the camera with his face glistening in sweat.

_“Holyfield vs Tyson 3, the biggest sport event of the last 20 years,” one of his followers wrote beneath the clip.

The comment has to do with Mike Tyson announcing that he’s making a boxing comeback for fights to help the homeless and those facing drug addiction. He told T.I. his plans in April while they spoke on IG Live.

Tyson, who’s 53, said he’s been working out and trying to whip his body back into fighting shape. He posted a video showing off his boxing skills, which many said they were blown away by.

The two former heavyweight champs fought twice before they retired, first in 1996, then in 1997. Holyfield won the first showdown by technical knockout in the 11th round. He won the second fight when Tyson was disqualified for biting off a chunk of Holyfield’s ear in the third round.

Some fighters already have expressed interest in boxing Tyson since he announced his return. One fight league president even offered him a life-changing amount of money to duke it out.

It came from David Feldman, president of Bare Knuckle Fighting Championship, who reportedly offered Tyson $20 million to join his league.

“While we did make a guaranteed offer of $20 million for Mike [Tyson] to fight for BKFC, we’re open to many different options as to how we can work together,” Feldman told Heavy.com. “Obviously, the excitement of seeing Mike’s video showing himself training and desire to participate in exhibitions inspired us to reach out and make the offer.”

Holyfield hasn’t mentioned anything about fighting Tyson, but the talk of the men squaring off for a third time has the internet ringing with excitement.

Tags:    Evander Holyfield Returns to Boxing After Mike Tyson Does the Same Fans Beg for a Third Showdown