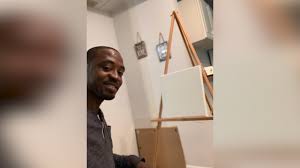 A Georgia man is unsure of his health status after he tested negative and positive for coronavirus within four hours.

Shaun Smith was 10 days out from his first test when he decided to get retested again Saturday, May 2 at Piedmont Hospital. Since the first one came back negative, Smith, who lives in the Cobb County area of metropolitan Atlanta, was shocked when he received a positive result.

“I was positive at 8 o’clock in the morning and negative at 12:30 in the afternoon,” he recalled to Fox 5 Atlanta.

Smith was alarmed but skeptical, so he took the additional test — this one through CVS — that came back negative._“It freaked me out,” he continued. “When that happened, I went into overdrive.”

Smith has started experiencing COVID-19 symptoms, but Piedmont won’t test him again for another three weeks. He was scheduled to have surgery for an unrelated ailment on Monday, May 4, but the procedure was postponed due to the conflicting test results. If Smith has the virus, he believes he caught it within the last 10 days despite wearing protective coverings and practicing social distancing.

Smith is worried about the potential consequences of inaccurate tests.

“It’s crazy to me that we have all of these tests that could be giving out false negatives or positives,” he said. “And people don’t even know and they’re just running with it.”

_He tried to express his concerns to health-care officials, the state health board and the governor’s office, but they have not responded to his calls.

“By taking this measured action, we will get Georgians back to work safely without undermining the progress that we have all made in the battle against COVID-19,” he said during a press conference on April 20.

The controversial decision was derided by critics on both sides of the political aisle, including President Donald Trump. More than 29,000 Georgians have contracted the virus and around 1,200 patients have died. The Centers for Disease Control and Prevention, based in Atlanta, warned deaths nationwide could surge to 3,000 per day by June. The current rate is 1,750 deaths a day. If the prediction comes true, more than 100,000 people could die._