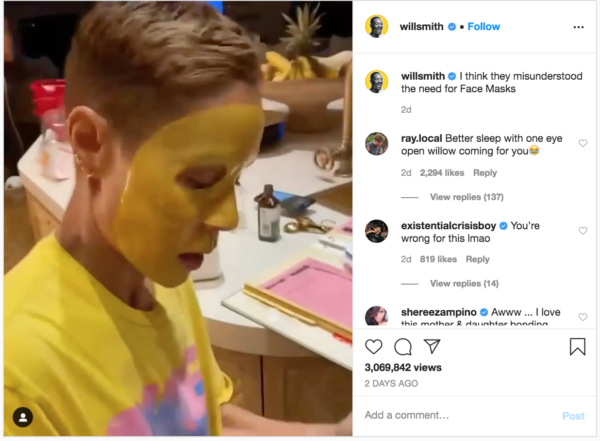 Will Smith interrupted his wife Jada Pinkett Smith and daughter Willow Smith during their mother-daughter bonding time and although his ladies weren’t too amused, Will’s fans got a good laugh out of seeing a relatable side of the family while at home.

The “Bad Boys 3” star has been spending his time while sheltering at place creating content for his new Snapchat series, “Will at Home.” When he’s not busy producing that, the superstar enjoys doing what any family man with spare time on his hands does: annoying those family members because they have nowhere else to go.

_Jada Pinkett Smith wears a face mask while baking./Photo Credit: @WillSmith/Instagram_In the video shared to Instagram, Will films himself ambushing Jada and Willow, who are seen looking comfy at home in loungewear and gold face masks while they bake. “So Willow, Willow and Jada are baking a cake, They’re baking a cake…which is cool. The only thing I don’t understand is why they need their skin to be right while they’re baking the cake,” Will whispered in the video before barging in on their baking and beauty session.

_Upon seeing Will and his camera enter the kitchen, Jada playfully warned her hubby, “Booooyy, okay, see. See now, I’m trying to help you out. I’m trying to make you the cake!”

Willow, on the other hand, was simply over the shenanigans, asking her dad to “Please stop,” while giving him a look that said she’d had more than enough of his jokes. She just wanted to bake a cake with her mom and moisturize.

_Fans of the Smith family cracked up over the candid video that reminded them that at heart the Smiths are just like the rest of us.

“Better sleep with one eye open willow coming for you?,” one follower joked.

“So all Dads do stuff like this… thanks for confirming. ?,” commented a third fan.

_Willow Smith wears a face mask while baking./Photo Credit: @WillSmith/Instagram_Will and Jada have been married since 1997, and although the two have spent over 20 years together, being with each other non-stop during the pandemic has made Jada realize that they both still have plenty left to learn about one another.

_“Will and I are in the process of him taking the time to learn to love himself, me taking the time to learn to love myself and us building a friendship along the way,” she told her guest, Pastor John Gray, during a recent episode of “Red Table Talk.” Let me tell you, that’s been something, to be married to somebody 20-some odd years and realize I don’t know you and you don’t know me and also realizing there’s an aspect of yourself you don’t know either.”


Tags:    ‘Better.Sleep with One Eye Open ’: Will Smith Crashes Jada and Willow’s Beauty and Baking Time