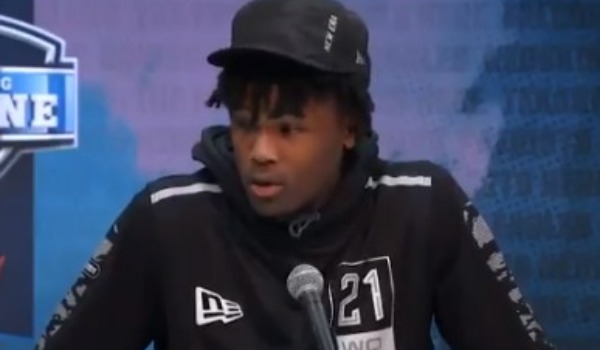 ESPN has apologized for highlighting a graphic relating to Tee Higgins‘ mother and her former drug struggles when the second round of the NFL draft took place on Friday, April 24.

Higgins was selected as the 33rd overall pick by the Cincinnati Bengals, coming out of Clemson University where he played as a wide receiver. During the selection of players, the network included graphics that contained background information on players such as obstacles they’ve faced along the way._When Higgins was called, the final bullet point on an ESPN graphic highlighted the past drug struggles of his mother, Camillia Stewart. She’s now been clean for 16 years._“Finalist for 2016 Tennesse Mr. Basketball, held offers from LOU, AUB & Tenn,” read the words next to an image of Higgins. “Sister, Keke, played basketball for Middle Tennessee State, Mom Camillia fought drug addiction for 16 years.”_The network was heavily criticized soon after. “Y’all really pieces of s–t @espn,” one person wrote.

Higgins eventually responded to that person’s message and said he’s okay with his mother’s past being out in the open. He gave her credit for being resilient too.

“I’m proud of my mom for turning her life around for me and my sister!” he tweeted on April 25. “I have no problem with them showing the world that my mom is a true fighter.”_The vice president of production at ESPN issued an apology via the Washington Post. He said while the network wants to provide some background information on players, they got it all wrong with Higgins.

“It was a mistake and we apologize for it,” said Seth Markman, who added the network now is looking into doing things differently when it comes to highlighted played information in the future. “We want our draft coverage to personalize players and, where appropriate, acknowledge the obstacles they’ve had to overcome on their journey to the NFL. This graphic lacked proper context.”

Higgins talked about his mother’s past in a video the NFL released earlier this week, where he revealed she was shot by a former boyfriend when he was in kindergarten. But Higgins also said she encouraged him to keep playing the sport he loves.

“Just seeing her go through the struggles that she did, it’s just something like no other. I don’t wish that on anybody. Her story is why I’m here. She kept me playing football,” Higgins explained.

Lamar Jackson retweeted the video afterward. Stewart was in it too.

_Higgins also wrote a message on Instagram about being excited to join the Bengals.