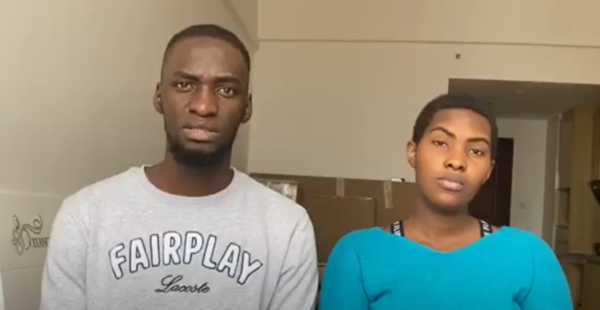 The ongoing problem of anti-Black racism in China was brought further into focus when a video of a Ugandan couple that was apparently turned away from a hospital for a pregnancy scan went viral. Chinese officials then made efforts to persuade the couple to deny they had faced discrimination and got them to record a video praising the Chinese authorities for treating them well. The couple says a harassment and propaganda campaign waged by the Chinese government against them has left them worried, stressed and scared._Daisy and Derrick — a Ugandan couple whose last names are withheld to maintain their safety — have lived in Dongguan in China’s Guangdong province for nearly three years. Like others before them, the couple left their home country to pursue a better life.

_On March 29, Derrick, who is a kindergarten English teacher, took his wife Daisy, who was 6 months pregnant, to a hospital for an ultrasound in Dongguan City, Guangdong province. The couple never got past the hospital staffer at the entrance in an incident Derrick recorded on his cellphone with the expectation the facility would deny service to Daisy.

The video opens with Derrick narrating as the couple walks toward the entrance of the Dongguan Nanhua Obstetrics and Gynecology Hospital. Derrick begins by panning the camera and saying he hoped they wouldn’t be turned away for service. “This is the place. Hopefully, they don’t send us away,” Derrick says shortly after the video begins as he and his wife cross the front courtyard toward the front doors._At that entrance, they are met by a Chinese woman in scrubs and some protective gear who is standing at an outside kiosk just next to a door, where she is apparently taking temperatures of everyone seeking to enter the facility._The couple meets this staffer, who, after talking at first in Mandarin, asks the two in halting English if they speak Chinese. Derrick replies that they do not, and then they extend their wrists to have their temperatures taken by a hand-held reader. The woman then tells the two to “wait” and she goes inside.

When the woman walks away Derrick picks up his narration again as he pans the camera back and forth from the kiosk to the staffer conferring at the front counter. “So they want to say foreigners are not allowed in the hospital,” he says. “This is what I expected them to say.”_The hospital employee returns within a minute and continues to try to communicate with the couple in gestures and her native language. Derrick asks the employee if they aren’t being allowed in because they are foreigners, and the woman seems to reply in Mandarin. He continues by explaining that his wife is pregnant and they want an ultrasound.

The four-minute video seems to indicate that the employee, who continues gesturing and speaking mostly in Mandarin, does not understand much, if any, of what Derrick is saying. She responds to this second interaction with the couple by going back inside to the front counter, whereupon Derrick resumes his narration.

“Foreigners cannot be let inside the hospital,” Derrick would say again as the hospital employee worker had a second conference with colleagues. When she returned to the kiosk the employee continued speaking in Mandarin as Derrick explained in English what they were seeking. He would go on to ask if the hospital had anyone who could speak English, at which point the worker seemed to gesture that a call of some kind was being made. Giving up on being allowed inside, Derrick and Daisy begin to walk away as the four-minute encounter outside the hospital door as the video ends.

Once the video of the incident went viral on social media platforms like Twitter, Chinese authorities tracked down the couple and took them to another medical facility, Derrick said. Officials also asked them to record a video in which they denied mistreatment, attributed the incident to a misunderstanding due to a language barrier, even dangling a reward of a promise to buy groceries for the couple._“They first asked me to put it off internet, which I told them not in position to do ’cause it’s everywhere now. They then took us to another hospital and we got a free pregnancy scan,” Derrick said in another video about his experience with Chinese authorities. “After they ask me to thank the government and deny what happened to us previously and we just call it a misunderstanding. I refused to deny that fact so they edited the original video and turned the blame on me for not understanding what the nurse was telling me.”

_Derrick says he and Daisy did not receive free shopping, claiming authorities took them to the mall, left, and made the couple pay for their own items. Derrick declined a