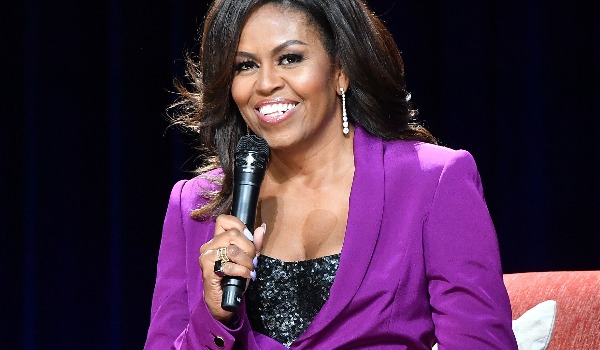 Michelle Obama‘s memoir “Becoming” was the bestselling book of 2018 when it was released. Forbes reports it sold 10 million copies, and Obama made $36 million from it. She went on a 34-city tour in the United States and Europe for the book as well, which people will see parts of in an upcoming Netflix documentary.

Obama mentioned the tour and the release of the project, also titled “Becoming,” in a statement. She shared some of her experiences during the tour in that statement too, which had to do with hearing amazing stories and having a shared hope with people. The documentary, which also will be about Michelle’s life, is set for a May 6 release._“Those months I spent traveling — meeting and connecting with people in cities across the globe — drove home the idea that what we share in common is deep and real and can’t be messed with,” Obama said in the statement.

_“In groups large and small, young and old, unique and united, we came together and shared stories, filling those spaces with our joys, worries, and dreams,” she added. “We processed the past and imagined a better future. In talking about the idea of ‘becoming,’ many of us dared to say our hopes out loud.”_The documentary is directed by Nadia Hallgren. It’s Michelle and her husband Barack Obama‘s latest project since they signed a deal with Netflix in 2018 under their Higher Ground Productions._The couple also released the documentary “Crip Camp: A Disability Revolution” in January of this year under the Netflix deal. It’s about Camp Jened, a former summer camp in New York for teenagers with disabilities.

Higher Ground Productions released “American Factory” before that, about a Chinese company reopening a factory in Ohio. It won the Oscar award for Best Documentary Feature earlier this year.

Obama posted an Instagram message about the “Becoming” documentary, in addition to the statement she released. In both messages, she addressed the challenges that many are facing while dealing with COVID-19. She also touched on the power of hugging people.

“As many of you know, I’m a hugger,” she stated. “My whole life, I’ve seen it as the most natural and equalizing gesture one human can make toward another — the easiest way of saying, ‘I’m here for you,’ and this is one of the toughest parts of our new reality: Things that once felt simple — going to see a friend, sitting with someone who is hurting, embracing someone new— are now not simple at all.”

_On April 1, Obama shared another post about the coronavirus by showing some of the handwritten notes that people have been writing to first responders.

“Let’s take the opportunity to tell them and their families that we see their sacrifices and we’re behind them,” she wrote. “A handwritten letter, an Instagram post, or a simple ‘thank you’ text can go a long way in letting someone know just how incredible they are and how much you appreciate what they’re doing.”_


Tags:   Michelle Obama Becoming Tour to Be a Documentary On Netflix