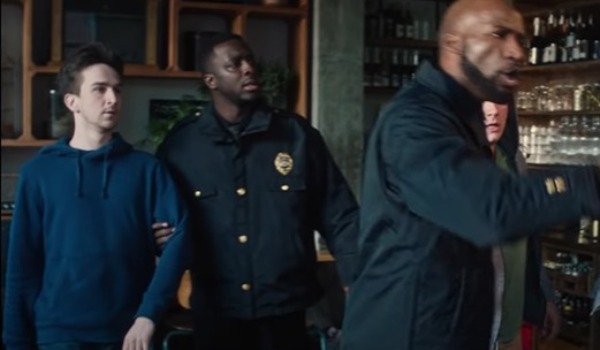 Wale released the video to his song “Sue Me,” featuring Kelly Price. The title is from the rapper’s “Wow… That’s Crazy” album, which came out in October 2019.

The video, directed by fashion designer Kerby Jean-Raymond, plays more like a short film. The plot paints a picture of a race reversal of sorts of Black and white people._Wale released a video for his song “Sue Me” that shows Black and white races being reversed._The lead character, a white male, wakes up in the morning with his family. A child then walks into the bathroom to brush his teeth and uses toothpaste that has a picture of a Black family on the box.

_The man then leaves his New York City public housing apartment and sees a billboard for a company called “WhitePeopleMeet.com.”_“Join the largest white dating community,” the sign reads.

From there, the man heads down to the subway and when he climbs the stairs to exit, several Black men dressed in suits — seemingly heading to work in the corporate world — pass him.

Wale is then seen exiting the Court Street subway stop in downtown Brooklyn.

A little later, the rapper and main character end up in a coffee shop called Morebucks. There, a barista calls the police on a couple of young white men, who are and not doing anything wrong.

The men are then taken away by Black police officers who also grab the main character.

Toward the end of the clip, the man goes to visit his father in prison. He tells him about a new law that’s been passed that will allow prisoners over age 50, with non-violent drug offenses, to have their cases appealed. But the father doesn’t seem like the new law will benefit him any.

“There’s no hope for people that look like us,” he tells his son.

A lot of people had positive things to say about the clip, which Wale posted to Instagram on April 22.

“This is incredible?? well done,” one person wrote.

Meanwhile, Wale has been keeping busy in the recording booth, recently appearing on the remix of Skip Marley’s song “Slow Down,” which also features H.E.R.


Tags:   Wale Explores What It Would Look Like If Roles Were Reversed for Black and White People In New Sue Me Video